Talking acquisition with guy in charge: The Drift, Vol. XXXI 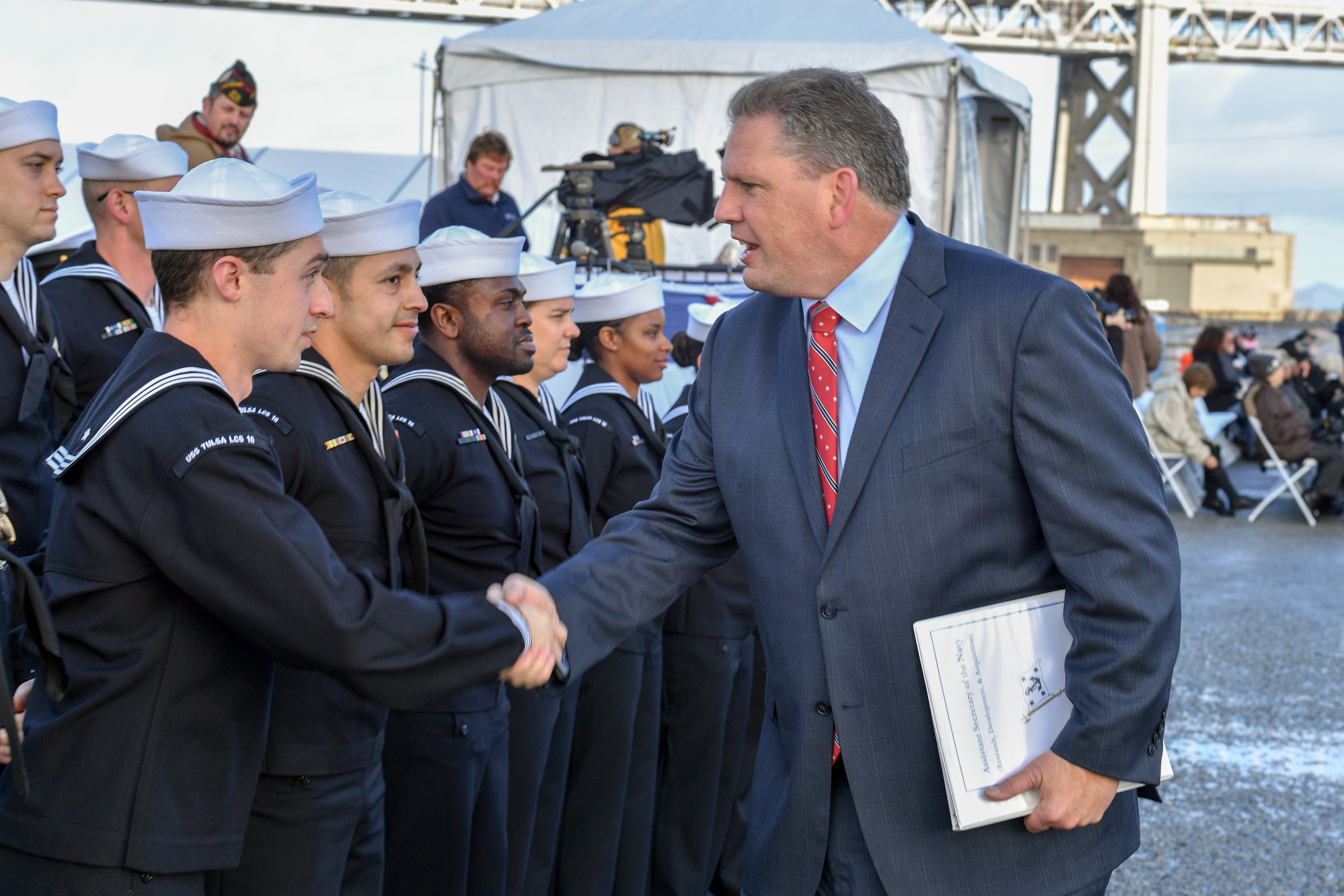 Well SeaAirSpace is over, but that doesn’t mean I’m done rolling out material. I had a great opportunity to sit down with the Navy’s top acquisition official, James Geurts, ahead of his luncheon talk at the symposium this year and there is a forthcoming Q&A coming out next week that focuses pretty heavily on challenges in the maintenance world.

But I had a bunch of extra stuff that I think adds some value, and in the spirit of this being a kind of dispatch from my notebook, I thought this was a great venue to roll it out.

A little bit of housekeeping: Next week will be the deferred Hit the Slides! edition where we comb through NAVSEA’s program briefs from SeaAirSpace for updates on interesting stuff in the works. Then The Drift will go on vacation for two weeks, and I’ve got a couple of very special guests lined up to fill in. I’ll be tramping around the highlands of Scotland for a week, then coming home for some R&R. But I’m excited about the content plan.

James “Hondo” Geurts is a man with a lot on his plate.

He’s in charge of locking down Block V Virginia, starting the Columbia Class ballistic missile sub project, FFG(X), Large Surface Combatant, a ramping-up effort for F/A-XX, delivering Ford Class and, by the way, he’s also been put in charge of fleet maintenance. So not an insubstantial portfolio.

Here’s some of what we talked about last week:

The Drift: The MQ-25 Stingray program was billed as a kind of test bed for rapid acquisition, can you tell me what you learned and how that’s informing your decisions going forward?

James Geurts: I think there are a couple of things. One is becoming much more integrated in the planning phase with industry and providers, whether that’s a technology provider through government program office or industry themselves. And getting what’s good enough, what’s fast enough and focusing on that, not just pure performance.

In the past, we tended to go, “Here’s a requirement I need, now let’s build a program around that.” And then, if you’re not careful, you can over-specify something or not have enough resilience. So, in MQ-25 and FFG(X), there is a much more interactive phase on the front end with the provider and the customer.

The other piece through our advanced naval technology exercises, what we’re doing with unmanned systems is get prototypes into fleet sooner, because it’s sometimes unfair to ask the fleet, “How are you going to operate a bunch of unmanned systems?” and to do that just on paper, without the ability to experiment is really difficult. And if we’re not careful, we make perhaps wrong choices on values of different performances.

So, you’re seeing us on the unmanned side say “Let’s not get it perfect, let’s get it out to the fleet, and the fleet development groups, let them operate it and inform the requirement and create a much more iterative process, not as much a transactional process. I think those will really help us in this new technology era.

TD: When you were with Special Operations down in Tampastan, you were known for your SOFWERX, which sought to link small businesses, academia, and innovators with the Special Operations community to solve problems. You recently launched NAVALX, can you talk about that effort? Is that an iteration off of SOFWERK or is it something different?

JG: It was an interesting pilot. We’re taking lessons out of it. The challenge is a little different in the Navy. In the Navy, we have warfare centers, we have the office of naval research, we have a lot of touch points. Our bigger challenges are not terribly well connected. And we don’t have a lot of tools that we make available to the sailors and Marines that they can use to solve their own problems. The NavalX construct is a little bit more of, “How do we mobilize, professionalize a full set of tools that folks can use for whatever problem they have?”

It’s kind of a learning platform where we’ve got pioneers and champions. And, you know, one of the opportunities for the Navy is to learn from ourselves. It’s a big organization and one of the challenges I saw is everybody wanted to invent everything on their own as opposed to learn from each other.

NAVALX really is to kind of break down to that one-stop shop where if you have a question, you have a new tool: who’s already doing it? You want to do a price challenge: You don’t have to invent how to do that. We know how to do price challenges, here’s who can go execute that for you. And I think that will both connect us and add a level of efficiency and so, think of it more as a platform of services than strictly a front door to walk in.

TD: Digital Twins have been a big deal in the Navy recently, can you talk a bit about what opportunities you see opening up as a result of that effort?

JG: It may be one of the most fundamental things we done over the last 18 months since I’ve gotten here. A destroyer is one of our most complex weapon systems. We have now been able to virtualize that in about a pelican case-worth of hardware and software. And, so, if you think forward, now you could have your certified combat system on the ship, through operational test, ready to go fight. You could have your next system in test on the ship, being tested as you’re operating in the fleet. You could have your third system with a bunch of weird and wacky algorithms doing AI kind of things, all on one single ship, and that can fundamentally change how we approach things.

And to show you how – a few weeks ago, we took a virtualized the complete combat system on an old destroyer, hooked it to the sensors, shot a missile and hit a target. And so, we think this is going to be a pathway not only to really revolutionize how fast we can modernize our current systems, but then kind of keep up with things.

There’s an old Eisenhower saying, “If you can’t solve a problem, make the problem harder.” If we made the problem so hard that we got only a week to update systems, not a year, then I think it will drive us to some of these new concepts.

It’s something we’ve got to address, stem-to-stern, through the enterprise, and really bring security back as one of our fundamental things we think about when we put acquisition strategies together. Having said that, I would actually argue digital twin being able to upload 24 hours from compiling the combat, all give you a lot more resiliency, because you can update your systems faster as you find vulnerabilities, you can deal with them faster. If I can have three versions of the combat system on the ship, and one gets corrupted, I can immediately deal with that. So, I actually see it as a means of resiliency, not as a vulnerability. I wish we got to think our way through it.

The other thing we’re seeing digital twin on more than just combat systems, we’re now building digital twins of our shipyards. So how do we improve the efficiency of how we repair ships? And looking at, “Okay, let’s look at the whole shipyard. Let’s model it, let’s simulate it, let’s figure out where there’s efficiencies.” So, I think you’re going to see that continue to kind of cross all the different domains in the Navy.